Liminal Chronicles    Launch Posts      Interview with Umeji Tatsuya - MC for Rise
Today I'd like to share an interview with the MC from my book Rise, Umeji Tatsuya, by a rookie journalist from the local paper. 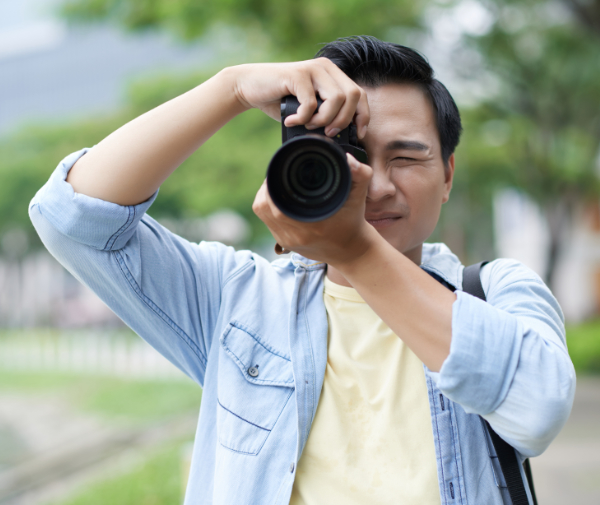 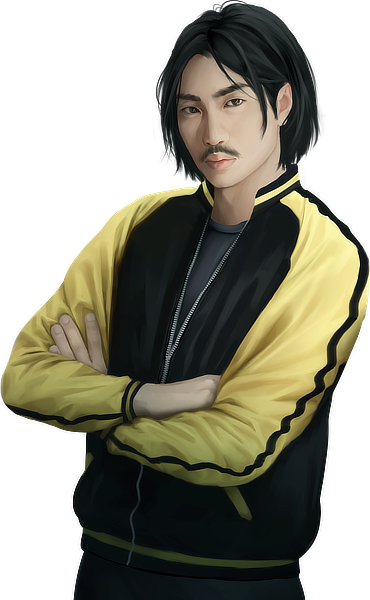 Umeji Tatsuya by Odette.A.Bach
A reporter steps in front of a man exiting the TaniMart parking lot. The target looks to be in his twenties, sporting chin length hair and a sukajan jacket for a casual rebel look.   "You're Umeji Tatsuya-san, right? I'm Konya Yasushi with the Nonogawa Times interviewing random people on the streets. May I ask you a few questions?"
Umeji
(He stuffs his hands into his pockets.) I don't do interviews.

Konya
There are a few rumors floating around town. Wouldn't it be good to put those to rest?
Umeji
(His eyebrow raises though he waves off the reporter.) Thanks, but...

Konya
(He shoves his mic at the target.) Is it true you used to be in the yakuza?
Umeji
Random? Pfft. (Muffled swearing.) Yeah. I was in the mob for seven years, but I've left that life behind. Permanently. 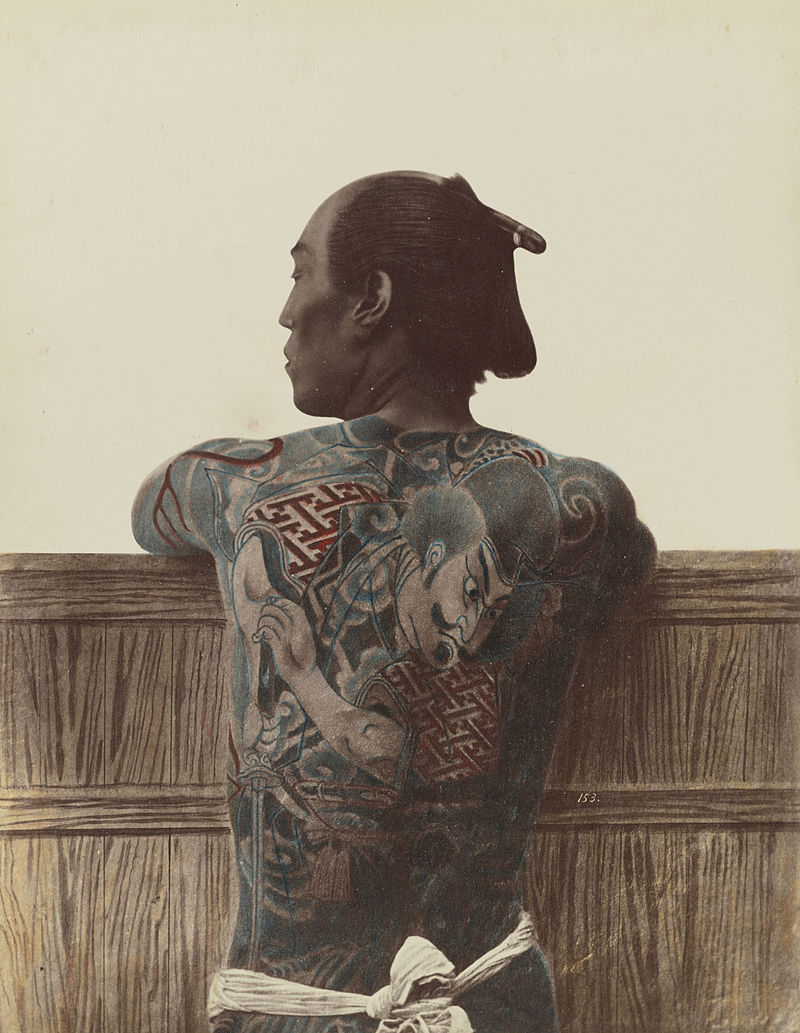 Japanese Tattoo (late 1800s) by Kusakabe Kimbei
Konya
Rumors are going around that you have interesting tattoos. Would it be possible to see them?
Umeji
(He rolls his eyes.) You wouldn't believe how often I get that question. I came here to start over, not show off my past. 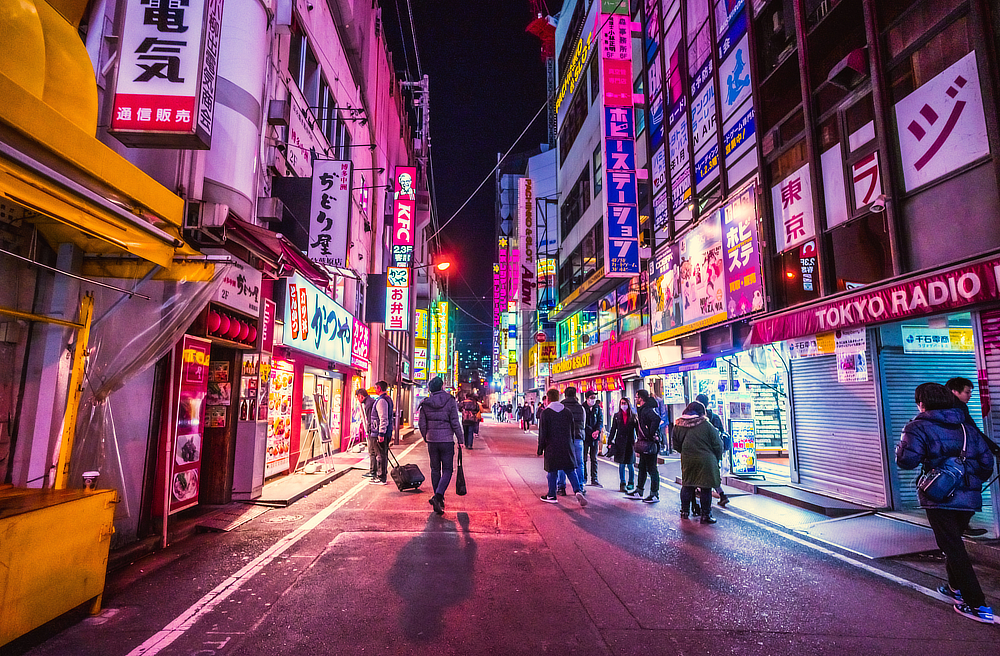 by Jezael Melgoza
Konya
Nonogawa's just a tiny town. So why here? Wouldn't it be easier to blend in when living in the big city? That's where you came from right?
Umeji
It would have been too easy to slip into old ways back in Tokyo. When the prison connected me with Satou-san, I figured this was my best chance, and I'd not been outside the Tokyo area before. Okayama Prefecture is known for its beauty, and I wasn't disappointed by the autumn colors. Everyone's been friendly too. Though, there was a rough patch after people learned about my past.

Konya
What happened? Who was the first to find out?
Umeji
(He shrugs, mutttering, "In for a penny, in for a pound.") Well, my tats were exposed when a jar of pickled plums broke and got my white shirt wet. Then the rumor mill took over, and several people tried to get rid of me. I can't blame them for not wanting a yakuza in town. But how in the world is anyone supposed to start over if they can't keep a job? I don't know how guys do it if they don't find a support network.

Konya
How did things turn around for you?
Umeji
That's the funny bit. It was Nakamura-sensei who first saw my potential when the town learned about my past. It's totally ironic because she was the first to try to get rid of me. But I helped her after an accident, and things changed.

Konya
So you hang out with an old lady?
Umeji
(Chuckles.) Yeah. She's helping me catch up with the schooling I missed out on. Speaking of...Sorry, I'm late for my lessson. Gotta go! (He bobs a bow before taking off at a jog.)

Konya
(He follows, but can't keep up while lugging a heavy camera.) Wait! What about the rumors of magic and mythical creatures? The public deserves to know!
Want to know more about Umeji? Check out his character profile: Umeji Tatsuya.

Do you have any further questions for Umeji? (The author has an in with him and can probably get an answer if it doesn't involve big spoilers.)

Find Out More About the Liminal Chronicles


Check out the series website liminalchronicles.com to learn about the characters, location, races, lore, and free stories related to the book.


Rise is available at these retailers in ebook and paperback format. An audiobook is expected to follow after launch.

You can read the first two chapters of Rise, by clicking on the cover below.


Amy is a former programmer turned author after her first trip to Japan in 2017. Now she writes Japanese myth-based urban fantasy to reconnect with the country and culture that captured her heart. She lives in South Dakota with her supportive husband, two wonderful kids, a mellow old cat who adopted the family when he was a tiny stray, and three wily and crazy ferrets.

You can read more about her and find the occasional ferret picture at amywintersvoss.com.