The Storm Winds of Glazglubin 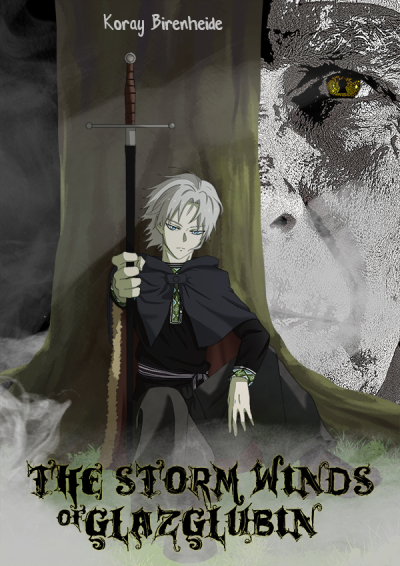 In the world of Aqualon

Well, well. There it was. A big, golden gate. Just a gate, though. Not the gate. The old man stepped closer and gave it a short rap for good measure. A quiet but pervasive, deep ring echoed forth for a brief moment and then died away. He knew it wasn’t the gate, because he had already stepped through that one. He’d stuck his key where a keyhole might have been, had given it a twist, and that was that. This gate, however, while looking rather impressive, rather like the real deal, had the tell-tale signs of fakery. Not so much in its make, but in its surroundings, this much was obvious to the old man.

For example, just to explore an arbitrary, hypothetical situation with no relation to the here and now, not even the slightest: If, say, a man came to you and claimed he had stolen the magic mace Kaplumbağa and proudly presented it before you. It certainly would look like the aforementioned Keeper weapon, a unique artifact indeed, unmistakable in its appearance. Even the keenest smith may not recognize the mace as a fake. However, and here lies the crux of the matter, something is certainly fake in this story. If the mace were truly Kaplumbağa, then the man showing it to you could be no other but the Keeper of Earth, thus it could not have been stolen; as one cannot steal from yourself. Well, in most cases, anyway. By the same token, if such a man were not the Keeper of Earth, the mace in his hands could not be Kaplumbağa, no matter how real it looked. Why? Well, they’re quite alive, those Keeper weapons. There are souls in there and magic to spare. Someone tries to pick it up without permission, the best thing that could happen to them is that they can’t. The worst thing... Ever seen a man beaten to death by the mace he is holding? One should think along those lines in this scenario.

And just like that, it was with the gate. Looked like the gate, but the key point was: It was set into a tall, monolithic wall. Quite the tell-tale sign indeed, since there shouldn’t be anything around the gate. So, altogether, the old man thought this little detail quite silly.

He peered up at the large plaque above the fake gate.

Having seen places like this before, he was quite intrigued. Most of them were landscapes. Somewhat devoid, but majestic nonetheless. After all, why build something in here? Building things was for elsewhere. Well, at least that was what people tended to think. The old man, of course, wasn’t people – or perhaps he was more people than your average person – and so he indulged himself, admiring the impressive structure before him. Still, he had never been an academic, so on a silly, inconsequential level, the sight of the tall university building intimidated him somewhat, irritated him even.

Now, should he try the key again? He peered at the fake gate. No. A university was hardly a citadel. A citadel might have been a smarter choice for his unwilling host. Then again, there was something to be said about the home-field advantage. Instead of breaking in, the old man walked around the tall walls, stepping through what looked, felt and smelled like well-trimmed lawn. Soon, he found an open door that led onto the campus. Perhaps, there was the odd school that was meant to be shut like a prison, but a university? What an idea…

Looking about, the old man soon found what he was looking for: a front desk. It was a little hut, again hewn from monolithic stone. Or magicked, to be more accurate. Or was stone magicked into shape still hewn? Well, it probably hadn’t been hewn into shape by the strictest definition of the word. There had been no chipping away from a larger block. Magicked was the word. Words were important.

The old man knocked onto the front desk and a person-shaped hole in the world appeared before him saying something along the lines of “∅.”

“Where might I find the professor?” the old man inquired.

“I would think there is only one professor here right this moment. If I knew him better, I’d hazard a guess where he might be just now, but alas…”

“That will do.” The old man reached for a key-chain clipped to his belt and pulled a copper key from it, placing the piece of currency gingerly on the front desk. As he made his way to the lecture hall building across campus, the yellow flashes behind him cast split-second impressions of his shadow onto the neatly paved ground, while the absence of the figure’s screams echoed across the empty plaza.

Halfway across the campus, there were more and more deliberate holes in the pavement, filled with a bit of what most certainly looked like grass and quite tree-like things rising up majestically. They had crowns laden with what was very nearly indistinguishable from leaves, which wafted gently in the non-existent breeze. The old man stepped past them, and as he did, the “leaves” turned yellow in a semblance of autumn. The same happened to the grass and the even larger ring of trees in the magnificent glade that crowned the center of the venerable university campus. He had never been to the Erdwald Domain, but the historic, cyclopean architecture of the university certainly sparked his wanderlust. No matter. He was growing more and more eyes in all sorts of places. The world wouldn’t even have the tiniest nook or cranny to hide from his penetrating gaze – in time.

When he reached the lecture hall building, the door was locked. A feeble obstacle. “I am here for a lecture.” There was a distinct click and it swung wide open. For every lock a key. “Metal for metal, words for rules.” He stepped in sighing: “423” at the sight of the stairs. His bones were less than enthusiastic about climbing three stories worth of stairs.

The steps were unusually numerous, stretching on and upwards beyond the constraints of ordinary space. After he had counted a thousand steps and quite a bit more than four stories, the old man’s patience had been quite expended. “I humor a fellow magus and this is how I am treated?” He reached into the folds of his jacket and pulled forth a golden key. Without blinking once, he jammed it into the smooth wall of the stairwell and twisted it round. A door seamlessly swung open and revealed the fourth floor before him. Almost there.

When he reached room 423, he pushed the final door open without resistance.

A man with umber hair was speaking intently into the lecture hall. A set of stairs led down to the black board in a shallow decline, fanning out into rows of chairs with a long desk plate in front of each row. A number of person-shaped holes sat scattered about the lecture hall. Some seemed to listen intently, while others were slumped over.

The professor’s met the intruder’s eyes. “Take a seat,” the he said with a scowl.

The old man picked a row in the back and sat down with a gentle smile.

Clearing his throat, the professor continued: “So, if you inspect illustration (b) on page 424 of your Codex Riccardium, you can see that the elemental magic diffuses around the targeted person. By attuning one’s soul to the elemental Ur-soul, elemental magic may be channeled through it thusly, but once such magic reaches the territory of the target’s soul, it collapses around that soul, thus making it impossible to directly affect the bones, tissues, and liquids in their body. You may ask yourselves, at this point, if this is the case, then how can healing applications of elemental magic work? The answer to this question is: By first attuning the soul of the donor to the soul of the recipient so that the magic can cross the so-called soul-barrier.”

The old man couldn’t stifle a grin. He pursed his cracked lips and whistled the first few notes of an old chantey, all while playing with the golden key in his pocket.

With rising irritation in his voice and expression, the professor continued: “Another special exception is the case of animancy, which of course falls outside the boundaries of elemental magic. That being said, the soul-barrier-principle can still apply against animantic assaults. The key here is to obfuscate the soulscape against attack. Though, of course, the soul is in most cases detached from physical dimensions, a handy visualization is the principle of surface area maximization. By folding the soul in on itself, maximizing its surface area, potential points of ingress are further apart from each other and thus more difficult to locate.

The soul has multiple attributes that have to be taken into consideration: computational faculties, information capacity, and power. Because the soul seeks to operate at perfect efficiency, its computational faculties constantly come into play when trying to maximize the use of its power. Thus, invading souls may be thrown for a loop by tampering with their innate calculations. The practice requires intense meditation and mental preparation but can, ultimately, be learned by anyone who has gained access to their own soulscapes.”

As the lecture had turned towards animancy, the old man’s whistle had died down and made way for a sinister smile and a yellow glimmer in his eyes.

The professor sat down and folded his hands, his gaze wandering across the classroom slowly, ultimately resting on the old man. “Now my fingers are interwoven. A knot with many ends and no center. Since you have been late for the lecture, Sir, how about you answer me the following riddle:

If I had the universe inside a box,

If the universe is in the box that you see,

Tell me, where would the Great Clockwork be?

The old man sighed, shaking his head. He stood up.

“Go on,” the professor said in a sharp tone. But the sweat on his brow betrayed him.

“A valiant attempt, dear professor, but once again, you strike at me from the low ground. Why, I am sure your boorish students would have said obvious things like ‘outside the box’, or if they were positively brimming with insight, something like ‘on the surface of the box’. Me, well, I am old enough to know all the riddles. I have asked all of them and collected bountifully from those who could not answer.”

The professor’s frown deepened into hard, unforgiving trenches as he seemingly tried to glare the old man into submission. “Your answer, then.” Every word was rife with disdain.

The old man walked back onto the aisle and held his arms out broadly as if to embrace the room and gave the professor a little poem of his own:

A riddle buys you seconds here,

Get minutes for a paradox,

You’ll lose a lifetime if you fear,

And gain one with a puzzle lock.

Then, giving a courteous bow and rising back up with a sly grin, he replied: “The answer to your riddle is: It is in the other box.” He turned his back on the professor and walked to the door. “Now, I think it is time to end the game. My move.” He pulled the golden key from his pocket and locked the door. The deafening click reverberated across the lecture hall like a mahôgi piece being placed on the board. <mate,> the old man though.

He turned around. The professor was still sitting at his desk. Before him, there was a black box. The old man’s grin widened, his lips cracking. “Going double or nothing with me?”