To Know Your Enemy

In the world of Toy Soldier Saga 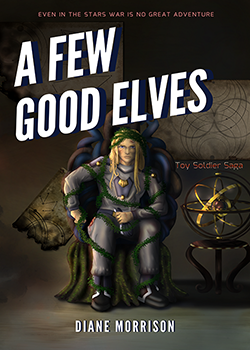 Want to read all of the Toy Soldier Saga fiction, even before the rest of the world does?Subscribe now!

To Know Your Enemy

Toy Soldier: A derogatory term for an elven marine.


Battles great and terrible, small and bitter, raged across Known Space as the wars of Elves and Orcs played out their legacy of hatred across the stars themselves. Epics would be written, songs would be sung; but wars are fought by real people with loves and families and homes.
Shaundar Sunfall has made it home from the war, but nothing is the same. He doesn't know how to talk to his family, and his relationship with his betrothed is strained. He can't sleep because he's haunted by nightmares, and drinking himself into an oblivion is the only thing that keeps them at bay.
So when Captain Madrimlian offers him a chance to get revenge against the orcs, he seizes it with both hands. The Avalonian Navy has a plan to infiltrate the orcs through transformation magic, sabotage their war efforts, and assassinate their leaders.
Shaundar will become that which he hates to fight the enemies of his people. But when you learn to know your enemy, you might also learn to love them...
Part naval adventure, part high fantasy, part space opera, and part war novel, To Know Your Enemy is the second book in the Toy Soldier Saga and the sequel to A Few Good Elves.


Get the first novel, A Few Good Elves, now!